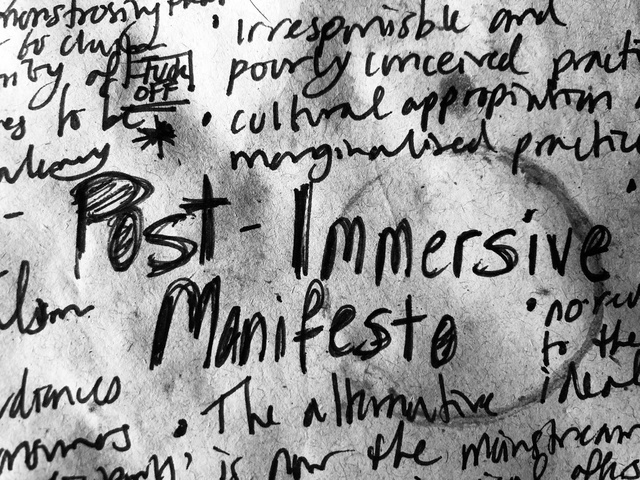 Over the past decade, ‘immersive’ has become one of the most overused terms to describe theatre productions that aim to involve audiences in unconventional ways. With the mainstream success of specific immersive productions, this trend now also extends far beyond the theatre and arts industry. From games distributors to shopping centres, just about every organisation seems to be discussing how immersive events can give their product an edgier public profile or increase sales.

Jorge Lopes Ramos is Executive Director of ZU-UK (formerly known as Zecora Ura and Para Active), an international theatre and digital art company based in London and Rio de Janeiro, which he runs with Artistic Director Persis-Jadé Maravala. ZU-UK creates interactive experiences using games, performance and technology, and believes that there is a need to establish a post-immersive movement in arts and culture production, because the term 'immersive' is not helpful in articulating a performance aesthetic or innovative methodology. More importantly for ZU-UK, the use of the word ‘immersive’ to describe theatre productions can often be detrimental to the contract of expectations a company wants to set up with audience members/guests/players/ participants – the people a company wants to co-create a piece with.

On 25 January 2015, whilst at a Devoted & Disgruntled event in London, ZU-UK had an opportunity to gather with a large number of arts professionals in the same space and time, all committed to discussions about the future of theatre and performance. They used the opportunity to meet peers who felt similarly angry at the irresistible rise of immersive theatre and compelled by the need for a Post-Immersive Manifesto. Their dissatisfaction was shared by many, who similarly felt the term 'immersive' was not enough, as it is usually equated to irresponsible and poorly conceived practice, in fact risking alienating audiences from theatre for life.

The form of immersion ZU-UK creates is grounded in empathy between audiences and actors who experiment with experiences of intimacy, care and tenderness in performance. The fact that artists have probably always had their edgy work co-opted by the mainstream is not new, but there’s something about working as artists now that feels like living in a video game. ZU-UK feel like they’re moving ahead by creating alternatives to the dominant ideologies, but snapping at their heels is the mainstream grabbing at their responses to the world, stealing and appropriating any radical ideas to be repackaged as cool. And the real problem? The real problem is that the alternative has become the mainstream. Late-stage capitalism is so crushing and so omnipresent that even irony is part of its vocabulary. The pursuit of intimacy, therefore, represents an act of resistance against commercially mediated social relationships.

Immersion and participation have become social and artistic signifiers denoting a collapse of traditional relations between producers and consumers during the contemporary information age. ZU-UK have articulated this in the past as the distinction between performers and audiences. Later, immersive technologies promised us that the audiences could become performers and the performers could be audiences. We could all be makers of collective immersive experiences. This invitation to participate prompted by interactive technologies and design would transform an event into an emergent network of social and material relations that never coheres into a discrete art-work. Art would become an event; always emerging and always changing. What happened to this promise? The hope was that the blurring of the line between producers and consumers might draw attention to the ways performativity and social interaction might produce meaning itself. It’s not that all the world’s a stage, but rather, the stage is an aspect of all the world. In this way, immersive artwork-events might bridge the gap between the sanctified aura of high art on the one hand and the crass commercialism of popular art on the other. If audiences are participants, how can they be mere consumers? How can art be reducible to a commodity?

At the core is human social interaction and the constitution of a kind of performance collective, a temporary community. The use of technology, clever design and stage tricks cannot accomplish this alone. The human component is still paramount in order to achieve intimacy, attention and care.

We're constantly building our Glossary Series to explore the language of the arts, if there's a term you'd like to write about for us do get in touch

If you'd like to keep up to date with all our blog posts, important and exciting stories in the worlds of theatre, arts and media, plus job ads and opportunities from our industry friends, sign up to our daily media briefing at this link.