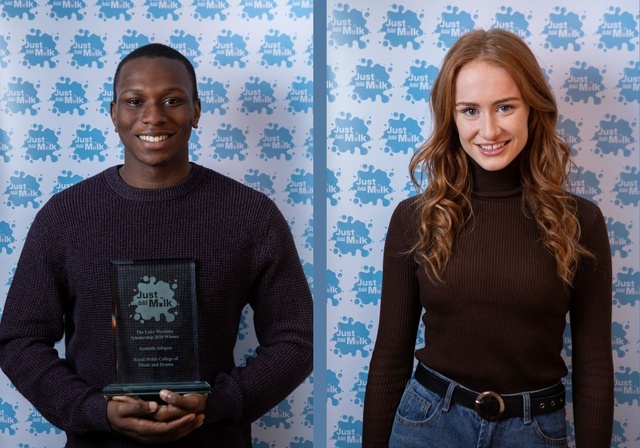 Winner of the Luke Westlake Scholarship (formally the JAM Scholarship) Ayomide Adegun and last year’s winner Madison Stock caught up via Zoom recently to chat to each other about their how their working-class roots played a role in their first steps into the world of acting, as well as the impact it’s had on their successes so far and their hopes for the future.

How did you get into acting? (Ayo)

“I had no previous acting experience at all really. I only fell into it at 16 when my drama teacher told me that I should pursue it because she believed I had the potential to do well and really pushed me to look further into it. At first, I honestly laughed because I thought 'no one actually does that do they?' Well at least not in my area, Peckham by the way! Then I found a college called The Miskin Theatre (fun fact Gemma Arterton trained there before she went to RADA) and that’s where I truly fell in love with acting. I discovered that becoming an Actor isn't a want it’s a need, Miskin is where the flame in my belly started and where the hunger began and I’ve been hungry for it ever since. - (Madison)

What about you? How did you get into acting? (Madison)

“I first got into acting through a counsellor who was a former actor. I was getting into trouble quite a bit inside and outside of school so had to see a counsellor to try and understand why my behavior was deteriorating. It was because academically I wasn’t performing well so the things I enjoyed doing such as football, gymnastics and other sports were being taken away from me as a means of punishment. My counsellor explained to me that I had to starting thinking about what I want to do at college. She got me doing workshops at the Young Vic, which was my real first introduction into acting. I really enjoyed it, it was a healthy form of escapism for me. The Head of Participation at the Young Vic advised that I apply for The Brit School. I did and studied theatre there for two years.” (Ayo)

Do you feel your experience in the industry has been different as a working class actor? (Ayo)

“Do you know what, as much as coming from a working class background can sometimes be tough - I have never yet experienced financial freedom like the majority of my peers at my drama school due to my parents not being able to fund me as much as they wish they could - I genuinely wouldn’t change it because I believe it’s been character building. I have worked since I was fifteen years old because if I want something I’ve had to work for it. This attitude has also been applied to my career. When I first went to drama school I thought being working class would set me back but it’s only now I realise with the way the industry is changing it’s in fact my greatest USP.” (Madison)

How did you feel when you heard your name being called out as the winner? (Madison)

“I was completely shocked, then ecstatic and very quickly humbled after remembering who the scholarship was named in honour of. Luke Westlake’s parents were also on the video call when I was announced as the winner and it made me think of how much I wanted to give myself the responsibility of making Luke and them proud. (Ayo)

How did you feel when you won the JAM Scholarship? (Ayo)

“I was honestly SHOCKED. As much as I imagined winning this award it still knocked me for six when Kristian called out “Madison Stock from ALRA!” So much so that all I could do was swear in front of the whole room! One thing I do remember shouting is “Big up the *explicit* working class!!” But honestly, I was over the bloody moon. I have always believed in myself and I feel like winning this scholarship was the first steppingstone in others believing in me too. I’ll never forget that evening at the Jam Cabaret.” (Madison)

Did you feel nervous about going to drama school coming from a working class background due to the stereotype of people accepted into drama schools? (Madison)

“Yes. I was very nervous. I went through a stage where I changed the tone of voice to sound posh or more effeminate to appease others who were not used to people like me from my background. I felt as though I wouldn’t be able to finesse roles of people from a completely different background to me. It took me around a year to realise, I am the most interesting person I can be & I don’t need to change to fit in. I realised that’s the beauty of coming to a place where people like me are not usually accepted; to be able to co-exist with people regardless of their backgrounds and learn from them, not judge them or allow yourself to be judged unfairly.” (Ayo)

What are your hopes in the future as an actor? (Ayo)

“My dream is to consistently be in work as there is NOTHING else I would rather be doing. It doesn't even feel like a want to act any more. It really is a need for me. As cringey as it may sound to some, I really know I’m meant to do this, I can’t waste the fire I have for it so I will never settle for anything else. I hope to inspire many young people who come from working class backgrounds and let them know anything is possible if you believe in yourself enough and that you can break through and come from nothing.” (Madison)

Where would you love to see yourself in 5 years in your career? (Madison)

“In 5 years I’d love to be with an agent I adore, working regularly on stage and screen. I also want to try my hand in business and continue engaging in youthwork with kids/young adults from disadvantaged backgrounds.” (Ayo)

What advice would you give to other actors during this time? (Ayo)

“Stay hungry, 100%. It’s easy to sit back and wait for things to happen for you. But I believe in order for these things to happen there needs to be a certain extent of graft and then what’s meant for you will find its way to you. Also, I know as an optimist this is easier for me to say than it may be for others, but try and see life for the positives because you’ll have a much easier ride. Well that’s what I believe anyways.” (Madison)

What advice would you give to next year’s winner? (Madison)

"Be grateful for such an amazing achievement and use it to spur you on to continue working harder than ever. The support you receive is so rare and vital, so put yourself in the best position to reap the rewards from it. Also, don’t forget to have fun!” (Ayo)

Do you have any stories you'd like us to tell? Get in touch and let us know!