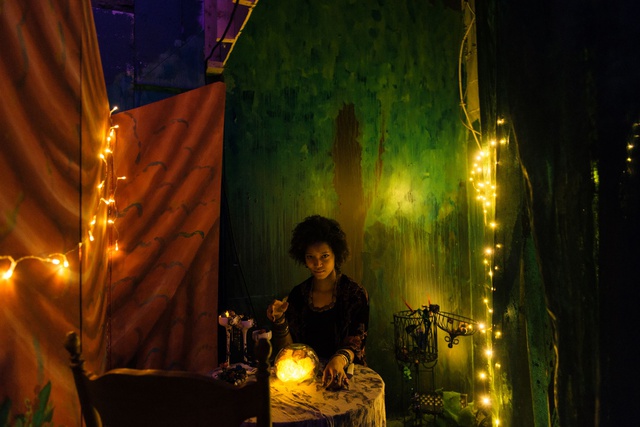 Immersive Theatre and Social Distancing: Not the best of pals

Working with Toronto-based company lost&gone on our latest immersive show, we have recently been having many conversations around ‘what comes next’ in this sector of the theatre industry. Although the word conjures up different ideas for different folk, my humble understanding of 'immersive theatre' is allowing the audience to take part in and influence the story as characters themselves. Whatever meaning you derive from the term, it generally involves close interactions with strangers; often far too close, often lots of them.

Within this branch of the theatre family, there is a feeling of making your own rules and breaking away from the traditional formats of theatre like the rebellious child who wants to pave their own way, while still being respectful of their parents. The idea of herding everyone into a space asking them to sit and quietly enjoy isn’t the immersive way. I had convinced myself that with every show we created, we devised a new structure, but these curious circumstances we find ourselves in have made me realise that we may not have been so out of the box as we thought. Yes, we have tinkered with traditions by allowing audiences to interact, influence the tale and create a unique experience along the way but this pandemic means we can take nothing for granted and puts our creativity to the test.

With lost&gone, we’ve been used to working via video calls for a few years with the team split between Canada and the UK, so no problems there, and we have always put a really strong emphasis on story and narrative, which is now more vital than ever. We have previously, however, relied heavily upon guiding guests to secret locations in imaginative ways, sneaking them through hidden doors, using elaborate sets and dynamic lighting to transport them to another world; these aspects of the experience aren’t so feasible with current restrictions. It has also really opened my eyes to just how much value we placed on the fantastic actors we’ve worked with. Their ability to pick up subtle cues and play off audience interactions is integral, as is the interaction between audience members and the endless extra storylines they create without us even knowing.

The real thinker during this time has been how to create these interactions and fully realised worlds in our new circumstances. We can’t rely on all our old tricks but instead have to present these multi-layered experiences in different ways, most commonly via screens, where subtleties can easily be lost. On top of this, one of the real values of immersive work is being able to make adventure personal to each audience member; when transferring this to a digital platform the practicalities of sustaining personalised experiences on a larger scale require a new way of thinking.

Every conversation at the moment seems to end with more questions, so with that in mind…

While I appreciate the difficulties which lie ahead, I feel confident we will be able to utilise a new toolbox of techniques to interact with audiences, ranging from traditional letters and phone calls to more recent advancements in VR and storytelling software. I believe successful adaptation will be achieved by actively creating work for these different platforms as opposed to trying to adapt our old work into this ‘new normal’. I also have an optimistic confidence that once we’ve been given the go ahead it won’t take long for people to crave tactile immersive worlds again and that audiences will be more open than ever to try something new.

Adam Lawler is a freelance theatre producer who has worked on shows in the UK and Canada, including a series of immersive projects with lost&gone. He also has a background in theatre operations and management and has recently co-founded muck + rumble, a new London-based theatre company focussed on collaboration and new writing.