Guest Post: Nastazja Domaradzka on Five lessons we can learn from Polish theatre 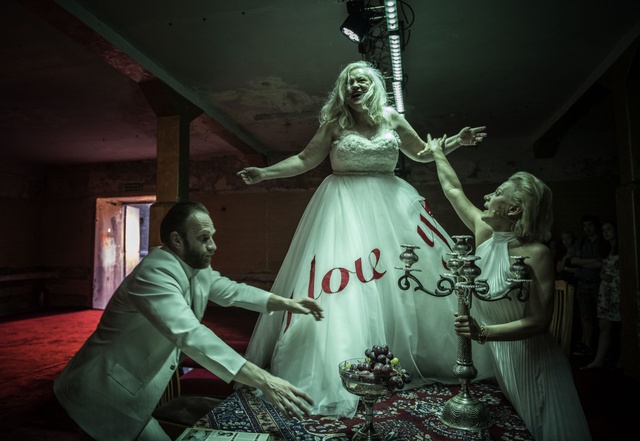 London-based Polish theatre maker Nastazja Domaradzka reflects on the state of British theatre and asks if there are lessons we can learn from our Polish counterparts, in a piece commissioned by Natasha Tripney in her role as Guest Editor for the Mobius blog

Nastazja is a London based Polish theatre maker whose practice is rooted in Eastern European political theatre and theatre of the oppressed. Her credits include Tash Brown's Scream Fire for The Revolution at Stratford East, Dziady/Forefathers' Eve at The Almeida, Peyvand Sadeghian's Dual and Vera Ion's This Kind of Air. Aside from directing Nastazja works at various drama schools and runs political theatre workshops.

I've missed live theatre. I'm hungry. I crave that sensation... You know the sensation I'm talking about. Someone from a theatre from back home, in Poland, said to me once: "if you don't get shivers at least twice during a performance, it doesn't count". No doubt, it was over vodka. Nevertheless, still true. And so I crave those shivers whilst I carry my theatrical background with me. A background that is often very misunderstood in British theatre culture. Despite living in the UK for the last decade of my life, I see so much of that theatre full of shivers being born east of the Berlin Wall. Call it what you want 'political work', 'radical work' or even 'experimental theatre ', I call it what it is: theatre.

Now that the British industry is slowly returning to life, the unreformable optimist in me, wants to see the crisis we continue to endure, both as an industry and a society, as a catalyst for change. Whether the crisis itself is pandemic driven, led by the actions of our government, space travel obsessed billionaires, or simply informed by our own 'personal is always political' views, we can't deny that it is here. The history of theatre, or simply even the history of humanity itself, teaches us that society in crisis is one that is ready for change. I want to believe that British theatre wants not only to strive for that change but be an active vehicle for it. Where I come from theatre has played a vital role in shaping the history of the country. Always an active witness. Quite often a judge. Not to say this type of theatre does not exist in these parts of the world, parts that my late Grandfather would describe as 'Western lands', but there is not enough of it. Perhaps in this moment of rebuilding better, amidst the constant worry regarding its own future, British theatre could learn something from Polish theatre. Five short lessons. A provocation. A manifesto of sorts.

1. Stand on the side of principles

In his letter to The Warsaw Theatre Academy students, Polish poet Zbigniew Herbert wrote, "In every moment, in every word uttered from the stage stand on the side of principles and beautiful craft." When I work with young acting students I often remind them that what they must seek in their process is truth. Both the truth of the world around them as well as their own artistic truth. When theatres closed, we lost the opportunity to physically and collectively experience the aliveness of our medium. Looking at the history of Polish theatre you quickly realise that its power lies in that collective aliveness mixed with a strong dose of truth. I'm convinced that shared truth for our times is yet to be found on main British stages, but I'm also convinced that without it our artform will continue to position itself on the fence. And so we must strive to constantly question what the role of theatre artists is in 2021 Great Britain. What are our beliefs and principles? How much passion is behind our words? How much is at stake? And no, its not meant to be easy, but isn't this why we are here in the first place?

2. Trust in the process of searching

One of the most well known Polish theatre directors Jerzy Grotowski showed a lot of reluctancy toward the idea of his practice being a new theatrical theory, instead emphasising the importance of embracing "the process of searching". Something that one could argue, cannot and should not be theorised. Grotowski, hugely inspired by Chinese theatre, saw the need for play and curiosity as a fundamental part of his practice, and so Teatr Laboratorium was born. Now more than ever we must search around us, look at those before us, imagine those in front of us, and break away from what we know and find comforting. Scratching the surface, and creating what Grotowski would describe as "grey middle class realities" can no longer be enough. Search for the new forms. The relevant feelings. Soul nourishing experiences. As British borders close up, our theatres should open up to new ways and possibilities, but this will only happen if we trust the process of searching. And that can be scary. Again, this isn't meant to be easy.

3.Theatre is not a product, audiences are not customers

"Except it is and they are, Nastazja, because we live in season 10 of late capitalism and the arts have been terribly underfunded for over a decade." Point taken. However the above is a quote from former artistic director of Teatr Stary in Krakow, Jan Klata. Read as part of the letter protesting cultural management changes in Polish theatrical system, it opposes the cultural ideology of art being 'managed' or controlled by the needs of the market, or even worst, the government. It stresses the importance of artistic independence, and in a way questions our relationship to audiences. Observing the painful quest of so many institutions trying to build new audiences and break away from relying on the same demographic I want to ask, when we talk about risk in our sector, which audiences exactly are we worried about loosing? Why are we so stuck on what we know? And is the artist's spectator relationship in Britain not in need of change if our sector is to change? Maybe it's time to trust our audiences. Maybe we don't know who they are yet. But if we sacrifice our truths in order to please them, won't they find out and call it all a bluff anyway?

4. Embrace the radical that is political

There is an argument to be made here that all theatre is of course political but I never stop questioning what we mean by the political. Isn't everything that happens on stage, off stage and in a rehearsal room dictated by politics? In Maja Kleczewska's Hamlet the ensemble consists of Polish and Ukrainian actors, directly connecting to the political of the difficult history between two nations. A political artistic choice yet one that does not make the piece didactic. Polish playwright Janusz Glowacki who spent a huge part of his life as an immigrant in London and New York reflected that for him his biggest cultural shock came from the way artists in the West expressed themselves. Raised by the communist censorship, Glowacki found the lack of metaphors and thebliteralism in theatre alien yet fascinating. Yes, it would be difficult not to agree that the Polish historical context of oppression, fight for independence, and strong presence of artists who were activist throughout history, makes it easy for Polish makers to wear that radical meta badge. Yet a change that doesn't reflect itself in form and artistic courage is not really a change. And if artistic leaders blame the lack of progress on that front on risk management go back to point 3.

5. We must not erect monuments for ourselves

A plea from already mentioned Polish director Maja Kleczewska. A call for humility so often lacking in an environment where gratification and approval can make or break us. Remember, why theatre? A question I ask myself at least every week. Let's make this about craft, not our own egos. Polish theatre is often regarded as one that is driven by discipline and dedication, so let that be our focus. Stanislavski's "love the art in yourself", echoes through. So take that passion and rage with creativity.

Have you learned any valuable lessons from other cultures and communities over the course of lockdown and reopening? Perhaps you've used this time to try some new styles and strategies, we love to hear from you on any new experiences you'd like to share. Just contact us on team@mobiusindustries.com