Guest Post: Sampira Al-Fihri on Theatre as a Revolutionary Tool 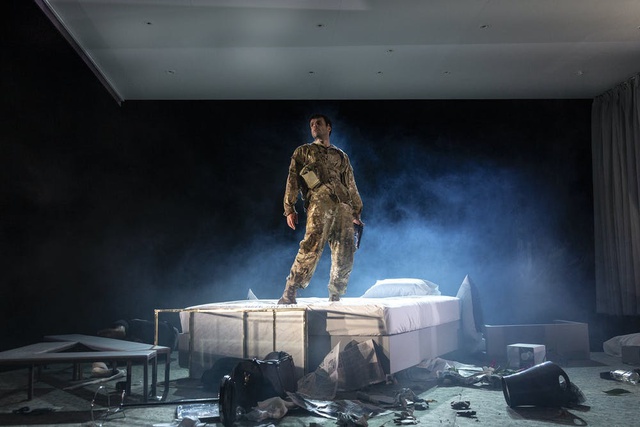 Following on from her article on Theatre as a Nuisance Maker Natasha Tripney acts as Guest Editor of the Mobius blog and commissions Sampira Al-Fihri's piece.

Sampira Al-Fihri is a horror curator, producer and writer based in the Midlands. Her work interrogates power structures and hierarchies, violence, protest, folklore, and historical figures. She works predominantly across theatre and visual art.

Here she talks to Mobius on theatre as a revoluntionary tool.

Art and theatre have radical roots that go back centuries. Theatrical canon heavyweights such as Shakespeare and Brecht, were deeply connected to the socio-political issues of their time and used art to interrogate these things.

We are all too familiar with our government’s attempts at suppression within the arts. Funding cuts will mean radical voices will be left with even less investment than before and institutions will feel under even more pressure not to platform critical voices – those not afraid to show the darker sides of humanity and the world.

These constant attacks on the arts can leave us feeling without hope. But art is one of the revolutionary’s tools. It can carry messages to the masses more effectively than other forms of media. That is why artists are a target. The power of our reach, the joy, education and passion we can convey, is something a government bent on ultimate authority cannot allow.

In recent times, some brave artists have come together to share knowledge, skills and passion, to reimagine the industry. Their commitment, empathy and ruthless love, is something that needs to be applauded. They are the lifeline of an industry that should be for everyone, not just the few.

Chinonyerem Odimba’s Princess and The Hustler, which depicts a Black family’s struggles with money and identity against a backdrop of the British civil rights movement (a period in our history that is very rarely staged), helps us navigate the world. Inua Ellams’ poetry and theatre sings of the things the establishment would rather not interrogate. He meshes mythology, rhythmic genius and honesty, political issues with joy, music and ancient tales, in a way that feels revolutionary.

Sarah Kane’s reimagination of the form and purpose of theatre, still incinerates every space in which it is staged. debbie tucker-green’s astounding body of work, forever interrogating existence, language and the cycles of generational influence, is timeless in its brilliance. In ear for eye, green takes us through both Black British and African American history and struggle, weaving them together. The trauma and need for revolution is all too similar.

Matthew Xia, Natalie Ibu, Chris Sonnex, Abdul Shayek, and Chinonyerem Odimba lead the way with ingenuity and a duty of care. They lead community-focused spaces that speak to, and not at, people who have been told subliminally: ‘This is not for you.’ But it is and always has been. Shayek’s commitment to Tara Theatre being completely open to the world shows in his first season, making a commitment to Afghanistan amidst the Taliban’s takeover. All proceeds from their For Afghanistan live event will go to Women for Afghan Women. Odimba’s leadership I can attest to myself, as a board member of Tiata Fahodzi. She shows an amazing amount of care in everything she does. She has made a commitment to deciphering what power means to her, and how she can help as many artists as possible, and what opportunities would be the most useful. This artist-centered approach is still unfortunately very rare. Sonnex is a humble and invisible force, placing himself behind the artists he platforms, which we saw with his work at the Bunker Theatre that challenged the stories on our stages and opened conversations around race and privilege and class. His appointment with Cardboard Citizens brings him into an opportunity to help those in need in communities that have been disconnected from art.

Theatre’s radical potential should not be forgotten or overlooked. The 1920s saw “agit-pop” theatre become a vehicle for political radicalism and engagement with working class audiences. Theatre became a source of great defiance and protest in South Africa too, with artists risking their lives to put on plays in the apartheid nation. The most famous of these, Sizwe Banzi is Dead, by Athol Fugard, was written in collaboration with South African artists John Kani and Winston Ntshona. As Fugard produced his plays with a multi-racial theatre company, his passport was revoked, as it was in direct defiance of the white government of the time. Despite these restrictions, his work stayed on its focus: to drum home the restrictions on the freedoms and humanity of Black people in South Africa, and his work endured.

As long as there has been suppression, artists have risked everything to fight for what is right. The government’s Crime and Policing Bill, which criminalizes group and individual protest, along with the Nationality and Borders Bill, which directly breaches the 1951 Refugee Convention, are attempts to make us fear. The government thinks it is bigger than it is, but it is not bigger than us, and we have strong shoulders to stand on.

From Efua Sutherland and Ama Ata Aidoo to Brecht and Kane. Grotowski to Boal to Artaud.

From Malcolm to Assata. Hampton to Antar. King Jr. to Korczak.

From Romaine-la-Prophétesse to Karski, Efendi to Wegner.

Art is key to revolution and now is the time for bravery. Our art is our ammunition. Our power that of care, empathy and compassion, the white-hot need to connect with our fellow man and interrogate our humanity as a collective. The UK government wants to disembowel the arts. No longer can artists fighting for their livelihoods be left out in the cold. If artists are to stand on their own, we need to embrace them, especially those of the most radical order. There’s a reason why communities will fight and protest for a youth or leisure centre, a library, a beloved pub, but very rarely, for a theatre. We need to start asking ourselves why.