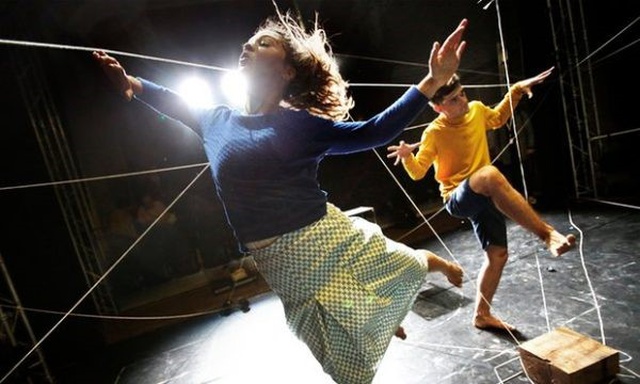 It’s Thursday 11 August 2016 at around 11am and I’m standing in front of Summerhall. I know, logically, what I need to be doing, which is to start walking back across the Meadows to where I am staying. But the play I’ve just seen has left me so completely floored I can’t quite remember how to do normal things like: speak or walk.

Us/Them by Carly Wijs was one of the surprise hits of the Edinburgh Fringe that year – on the morning I went to see it, people were being turned away at the ticket office – not least because it was a kid’s show with a start time of 10am. It told the story of the Beslan school siege using a deceptively simple array of childlike toys, mainly chalks and skipping ropes, and the talents of performers Gyntha Parmentier and Roman Van Houten.

Seeing Us/Them, which later transferred to the National Theatre, was an event in itself, but it was also the start of my now long-running love affair with Big in Belgium, the showcase of Belgian theatre that comes to Summerhall as part of the Fringe each year. But it’s not just Belgian theatre I’ve developed a ‘thing’ for, increasingly I use my trips to the Fringe as an opportunity to deliberately see as much theatre from outside the UK as possible. It’s often the only chance I’ll get to see these companies in Britain and doing so resets how I then watch British work in Edinburgh and back in London. It’s not necessarily a question of which country makes the best theatre (although many, many times I’ve seen excellent Fringe shows by international artists), but that it makes me aware how everything about the ways we make theatre is a choice, often a following or subverting of traditions, and that certain themes or ideas that might be looming large in British minds, aren't the same concerns preoccupying other theatre-makers and audiences.

A supersonic whizz through the international greatest hits of my previous years at Fringe would include, in no particular order: Medea on Media, a Korean remix of the ancient Greek tale (directed by Hyuntak Kim) featuring Tweety Pie masks, plastic guns, yoga interludes and a couple of fake rainstorms; the year I went to pretty much the entirety of the superb programme put on by South Africa’s Baxter Theatre (who doesn’t like to be a completest?); and The Humours of Bandon by Irish company Fishamble at Dancebase, a piece about the insanely competitive world of Irish dancing which basically restored my faith in theatre right at the point of Fringe exhaustion when I needed it most.

Last year alone, there were three major highlights: the fierce, complex and truthful Cock, Cock, Who’s There… by Samira Elagoz and the visceral, mellifluous This is the Title by Ima Iduozee, both on as part of the From Start to Finnish showcase, plus The Delusion of Home, a deconstructed meditation on King Lear and homesickness directed by Jhao-Cian Wang and programmed by Taiwan’s Our Theatre.

Of the shows I’ve personally seen, I’ve found wild variations in audience attendance, some like Us/Them were well attended, but others like The Delusion of Home had, it’s fair to say, a little bit less love shown to it by the Edinburgh audiences. But audience numbers aren’t the only gauge of popularity. One of the things that consistently saddens me – and I make this assessment using the 100% unscientific data collection method of ‘people I generally chat to in the London theatre industry’ – is how so many excellent international shows, even the well-attended ones and the ones that get good individual reviews, fail to solicit the same Edinburgh ‘buzz’ British shows do. You know what I mean, the shows ‘everyone’s talking about’, the ones you keep getting asked if you’ve seen.

International shows often come to the Fringe as part of a recognised showcase, for example Big in Belgium, From Start to Finnish, Taiwan Season, CanadaHub, the Swiss Selection in Edinburgh. Other times they’re simply there individually, with or without support from their country’s arts councils. Earlier this week, I spoke to Hongjia Qi, producer of the From Start to Finnish showcase that has officially been running for nine years (and unofficially, ten). He says they bring Finnish work to the Fringe in order to promote the country’s theatre and performing arts to an international audience, and to give their artists the opportunity to network with arts professionals from across the world.“We’d like to, on the one hand, raise awareness of Finnish performance and on the other hand find more international collaboration opportunities for Finnish artists.”

Finland, Qi explains, is a relatively small country but one with a “very vibrant theatre and performing arts scene”. When I ask him what he thinks Edinburgh audiences get from seeing Finnish theatre, he says he believes it’s “refreshing” for local and international Fringe audiences to see the Finnish artists’ “viewpoints on social and worldwide topics” and how they “realise their ideas and artistic visions through their work”.

For 2019, the From Start to Finnish showcase is made up of five very different works. Qi suggests that the overriding theme is “how artists navigate this rapidly changing world”. It’s not, of course, a topic that’s unique to Finnish artists – in fact, there are probably a huge number of British shows that could come under that umbrella term – but it’s hard to overstate how valuable getting a different perspective, even on a familiar topic, can be. And, as Natasha Tripney eloquently argued, with regard to watching European theatre, that feels like an especially important thing for us living in Brexit Britain to be opening ourselves up to.

So, to get you started with adding more international shows to your schedule, here’s a few tips:

1. CanadaHub based at King’s Hall, is putting on three shows by Indigenous artists. I’m most excited about seeing Deer Woman, a play about the sister of a girl who goes missing in a country where over 1600 Indigenous women and girls are recorded as missing or murdered.

2. For the second pick, I’m leaning on Hongjia Qi who passionately recommends people go see Ali and Alpo at Summerhall. The wordless two-man show, which fuses traditional Iraqi oud lute music with Finnish contemporary dance started out as an exploration of the similarities and differences in Middle Eastern and Western cultures. It gained extra significance when Ali Alawad, an Iraqi musician, had his asylum application denied by Finland and was forced to return to Iraq. The work is now performed using a live projection of Alawad playing from Iraq. Qi describes it as “such a beautiful work” in how it fuses a “connection between these two different cultures”. He adds, “We through it was really important to bring this performance to Edinburgh to give voice to those who cannot perform their artistic visions as freely as many other people.”

3. Monster at Dancebase as part of this year’s Taiwan Season, one of two Taiwanese shows on at the venue, looks like a brilliantly discombobulating interrogation of time and sense of self (basically how you’re already feeling come week 2 of the Fringe).

4. Theatre Ronin from Hong Kong are bringing Hoichi the Earless, an adaptation of a Japanese horror story about a blind lute player haunted by the dead, to the Fringe following its performance at Avignon Festival 2018.

Rosemary Waugh is a freelance arts journalist and theatre critic. Her current work includes regularly reviewing theatre for The Stage, Exeunt and visual arts for Time Out. @RoseEllenCherry