The Handke Project - Examining Freedom Of Speech Versus Political Consciousness 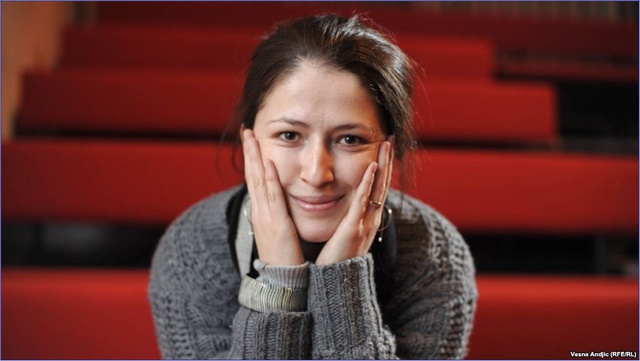 As part of a long read series, Nick Awde meets with director Blerta Neziraj to discuss the process of creating a highly charged play that examines freedom of speech versus political consciousness/responsibility, viewed through the Nobel Prize for Literature to Peter Handke – a controversial event due to the Austrian playwright/novelist’s alignment with Serbian nationalism. The play is in English, performed by a pan-European cast in a European co-production by Qendra Multimedia with Italy’s Mittelfest & Teatro della Pergola, Germany’s Theater Dortmund and Bosnia and Herzegovina’s National Theatre of Sarajevo & International Theatre Festival MESS/Scene MESS.

The Handke Project is touring across Europe until the 30th October.

Nick Awde: Did you start working on the project at its genesis, or did you wait until the writing was complete?

Blerta Neziraj: I already had a few images, ideas and views about certain scenes and a general feel for how the show would look long before the text was ready. In other words, I had a few first directorial impressions that were part of my directorial ‘alarm’ which, once switched on, always remains active until the show is over. Of course once the text came, everything got easier. But not that easy! Because this is an intense theatre text full of references, full of implications, irony and sarcasm – which is typical for Jeton (Neziraj, writer).

NA: What is the thinking behind an international ensemble, and how does it work not only in terms of the different languages and techniques they bring to the table but also their cultural/political filters?

BN: Part of the challenge of the work process here is communication in a language (English) that is secondary or even tertiary for us, and for a project like this, it is an even bigger challenge. Oftentimes we might not manage to communicate to each other what we want, but we try our best and the linguistic and other barriers are tiny in comparison to the benefits, which are mostly artistic in nature.

NA: What are we to think when we see The Handke Project?

BN: I would like the audience to leave with good impressions of the show, not necessarily to agree with what we say on stage but to at least start thinking about it. Of course, if the audience leaves irritated at the stupidities of Peter Handke and the Nobel Committee, that would be ideal. But they can also leave irritated at our approach.

I would absolutely not like it if the audience leaves the show in the way they would after watching an entertaining comedy. I would not want them to leave relaxed and enthusiastic for the ‘perfect world in which we are living’.

NA: Was the idea always to take the production abroad?

BN: Yes. The show was conceived that way from the beginning, as a show that tours internationally. This is why we hired actors from various countries and decided on English as the show’s language. We have produced shows of an international character before, and they have been conceived in the same way from the start, from choice of subject to selection of the cast and the way they are put on stage, with everything having been conceived for international touring.

NA: What challenges have there been in bringing The Handke Project to life?

BN: The list is long. We always have less time than we need, and unanticipated things happen all the time. This or that collaborator gets sick, this or that actor has family issues, this or that kind of light cannot be found, there are no stores for masks, you cannot order this or that video-projector because you cannot make international online orders from Kosovo… Everything of this nature that can frustrate you.

And of course it was frustrating during the process that Serbian actors whom we hired decided to leave the project because they considered it to be a sensitive topic. Unfortunately, the rehearsal process is not always that entertaining and before arriving at the finish line, everyone’s stress levels reach a peak...

NA: How does the production reflect Kosovo theatre and culture?

BN: I think this is yet another show that manages to show the energy, pulse, enthusiasm and will that has been dominating our theatre scene for a few years now. We are inspired by the local dynamics but we bring a universal approach and aesthetics, open and accessible to all.

NA: How do you think audiences will react, country by country?

BN: The audience can surprise which is why I have given up such presumptions. I simply try to do my work the best way I can and know, and then that work is subject to the audience’s will.

From all the work that Qendra Multimedia has produced up to this point, we know the way how our direct and political topics provoke extreme reactions: from enthusiasm and euphoria on one hand to anger and rage on the other. All reactions are legitimate so long as they are not violent.

NA: How important is Qendra Multimedia’s Kosovo Theatre Showcase to your work?

BN: The Showcase is a good opportunity for us to present our country’s productions. Thanks to it, for example, my show a.y.l.a.n, produced by the City Theater of Gjilan, was invited to Poland’s Kontrapunkt festival (in Szczecin) and won the main prize there. Before that, the City Theater had never travelled to a festival outside the region.

At the Showcase, we not only get to present our work but we also have the chance to meet theatre creatives, promoters and journalists from other parts of the world, because this is something we are still missing in Kosovo – contacts and the exchange of experiences.

The Handke Project is touring across Europe until the 30th October.