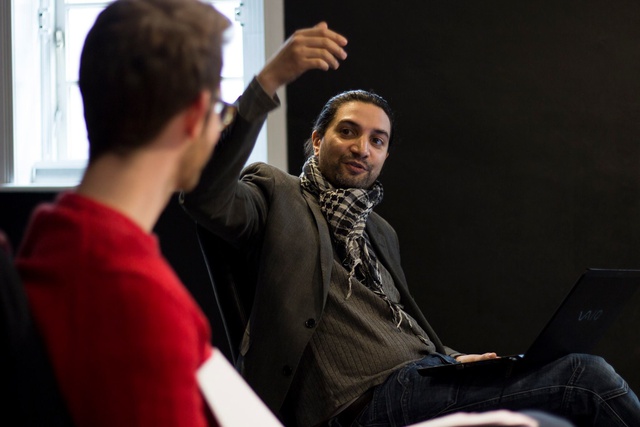 There is more to international theatre production that academically accurate translations of the script. Artistic Director of Exchange Theatre, David Furlong talks to Mobius about their experience of writing and producing truly bilingual theatre.

Not only do purely linguistic tranlastions limit the meaning and purpose of a play but they can miss the point entirely. Here David talks of the importance of understanding the language and cultures fully as well as the discovering he and his team have made on the journey to creating a bilingual theatre company.

You can watch the company's documentary IN Exchange now as part of Living Record to learn more about their practice and work.

At Exchange Theatre, we were always multilingual but it took us half of our company’s life to become a truly bilingual theatre company and another half to be seen as such. Bilingual theatre is so vital when working on a show that isn’t in its original tongue. Often when performances are ‘translated’ into English they are adaptations, and they make the plays more British. But an adaptation of a play takes it away from the original.

The initial purpose of Exchange Theatre was to produce faithful translations of French-speaking plays. And it quickly became apparent that meant not only seeking the translations, seldom found, but actually creating them ourselves, for which our bilingualism is essential. Translation was somehow part of me. I am from Mauritius and I grew up speaking French at home and English at school. Therefore I developed a natural inclination to translate French plays into English or English works into French.

With Exchange Theatre, we started a real process which led us to become a fully bilingual theatre company, producing our plays in double parallel productions in two languages, with fully bilingual casts. It was a journey filled with learning and experimentation.

The lessons of translations

Over the first seven years of the company, we experimented with several different translating approaches.

In 2006, we found our first translation of Paul Claudel's The Exchange by a retired university professor in Wisconsin. When we received her translation, written in the 70’s, she mentioned in a letter that the translation was probably a bit dated and so I ended up having to re-write some of it myself as we could not afford a scholar. The translation was later praised by an esteemed professor, which was empowering, and so I decided to carry on. In the first four years of the company I re-adapted an old Sartre translation by Stuart Gilbert and I translated two Georges Feydeau farces, in collaboration with my company co-director Fanny Dulin.

When we were working on Xavier Durringer’s translation of Bal Trap. I approached Mark Ravenhill who had previously translated one of Durringer’s plays to see if he would do it again. When he answered “I don’t speak French”, I was confused as his translation had been performed at the Royal Court. Then he explained that his job was just to rewrite from a literal translation. Playwrights are so important in the UK that their credit as a translator can be crucial to the commercial success of a show. It's a great way of having David Harrower’s version of a Strindberg play or Tony Kushner’s new translation of Brecht. But however good those productions and playwrights are, they are not Strindberg or Brecht, they take on their own new style so the plays are not pure translations. And it isn't important whether or not to anglicise the play, that’s not the point.

So we started to understand what we were doing differently and realised that maybe the success of our work was based on its bilingualism; because we were looking at pure linguistically and culturally sensitive translations not adaptations. In changing the language we still want poetic licenses to be kept and rhythm to be close to the original. The rhythm is very important. There’s a rhythm to the thought, the delivery, the sound of the language. With the company, we found that this rhythm can also be translated, we find equivalences that work. It’s important to serve the intentions of the original playwright as best possible.

In 2008, we workshopped our translation of Bal Trap with actors in the rehearsal room to hear the spirit of the work. With actors, we reached deeper into the language of the characters. We were very concerned by the fidelity to the original, but sometimes the translation found by an actor or writer who understands both the languages and the cultures behind the play feels so real: It’s not faithful in a technical way, but it feels true to what the original line’s real meaning.

As we were translating a Feydeau farce for example, we looked into an existing old published translation of Madame’s Late Mother where a character said in the original old French “Je ne trouvais pas de lanternes”, Lanterne literally means light, like cabs have on their rooftop, so the translation should have been “I couldn't find a cab”. But the translator, a university professor Emerita, translated literally the words he found in his dictionary and made the character say in his version “I couldn’t find a light” which makes no sense at all in the context. Theatre translators can’t be just academics. To be literal would be to miss the point and often the joke.

After our first five years, in 2011, we were invited to create work at the French Institute for young audiences. This time, our audience too was bilingual and it allowed us to explore the coexistence of languages on stage, to actually create bilingual work from scratch, not just translate existing pieces.

After twelve shows, in 2013, we decided to try the formula with full length plays for a broader audience. We first produced our play with two parallel casts. Un Air de Famille and A Family Affair: One in French, one in English. The observations we made looking at both similarities and differences between each cast were very interesting and informative. But the two productions were a bit too different. Because here what’s fascinating:

What we want is to combine the two in both performances; have a French performance which grabs the nuanced quality of the English and an English show which takes advantage of the newly-found straight-forwardness of the French. This is unique and a work of passion.

From 2016, when we started our Moliere Diptych we decided to do only double parallel productions of the same plays both in English and French. The idea was to apply the strength of our bilingualism, everything we have understood when translating, to our whole process and create a production which was connected to the performers' lived experiences of their languages, to the point that an audience can see both plays and feel the same!

This makes us reach for very singular profiles of actors; we only cast bilingual people who have a commanding use of both languages, so they’re also really interesting people. Not only bilingual, they generally have parents of two different origins, who grew up being multilingual, in a place which isn’t their parent’s culture mostly, they are third-culture people.They also bring a great variety of identities to the piece. It’s not related so much to the French identity than the French-speaking world and the language we have in common. It’s refreshing to see an Iranian or an Algerian female-lead ! It simply reflects better the time we live in! The best reward I got from the audience and even the cast members, was a feedback from the experience: they said that as bicultural people, they finally found some work in which they felt represented.

Have you had any experience of language barriers in cross-cultural theatre? We'd be interested to hear your experience and opinions as either producer, writer, performer or viewer. What other ways can theatre companies look to create culturally respectful interpretations of existing work? If this is something you're currently looking at in your own work we'd love to hear from you.