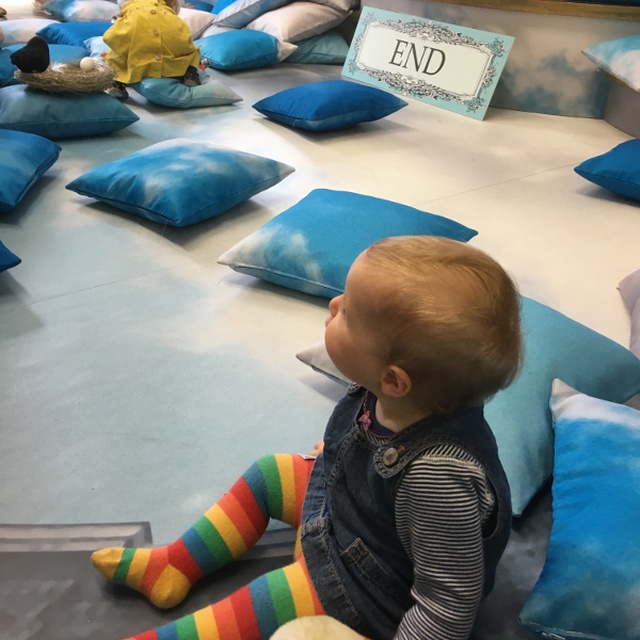 From our guest editor Theo Bosanquet: As the father of a four-year-old I've become aware of the burgeoning amount of theatre for very young children. So I asked Jo Caird, an arts and travel journalist who runs the Baby Adventuring blog, to investigate further.

While grown-up audiences fret about sweet wrappers and mobile phones, patrons of early years theatre are merrily storming the stage, grabbing the props and bursting into noisy tears if they see something they don’t like. And so they should – after all, what’s the point of theatre if not to provoke a response?

Making work for the under-2s, an audience that literally stomps all over theatre etiquette and doesn’t give a hoot about concepts like character, narrative or the fourth wall, presents a challenge for theatre-makers, but also an opportunity. Theatre for babies and toddlers – when done well – is the form at its purest and most experimental, a chance to play with storytelling, communication and sensory pleasure without any of the baggage that theatre for grownups usually carries.

Work for this audience may still only make up a tiny proportion of the children’s theatre market, but it’s a genre that’s mushroomed in recent years. Venues like the Unicorn in London, The Boo in Rossendale, Lancashire, The Gulbenkian in Canterbury, and the recently opened Hullabaloo in Darlington all regularly produce or host performances for babies and toddlers that are just as original, technically innovative and well crafted as theatre made with grownups in mind.

Tim Webb, artistic director of children’s theatre company Oily Cart and a pioneer of early years theatre in the UK, believes this is down to the fact that there are “a lot more people coming out of university and drama school who take work for babies seriously, not as something to do until you get a proper job”.

Some shows for youngsters adopt extremely simple versions of the sort of linear narratives you find in mainstream theatre for adults, while others have more in common with live art. Glisten, for example, which I took my daughter to see at the Half Moon Children’s Theatre earlier this year, featured actor and theatre maker Daniel Naddafy shining a torch on his feet while doing giant steps around the stage and then crinkling and uncrinkling bright and shiny material – it was great.

Both approaches can work but either way, flexibility is key. Oily Cart made Jumpin’ Beans, their first piece for babies aged 6-18 months, in 2002, having spent two decades making work for children of a range of ages and young people with learning disabilities. Webb remembers being inspired by a Belgian early years show but feeling let down that the music was all recorded – it made the show “inherently inflexible”. The solution, at least as far as Oily Cart’s shows are concerned – and they’re the best in the business – is to include a musician playing live. “If a baby changes the show’s direction the show can change as it should,” explains Webb.

The best performance for babies sets up an imaginative framework and physical context within which its audience is free to express itself. Some babies are shy and some very adventurous and a production needs to cater to all if it’s to succeed. One way of doing that is by factoring in close contact between the performers and each little audience member. This is easier when performers are not too outnumbered by their charges, but a cleverly conceived production can factor in one-to-one engagement even when there are lots of babies and just one performer.

Another way of ensuring each child has a good time on their own terms is to give the audience a measure of physical freedom. A show needn’t be a complete free-for-all, but under-2s theatre that is too prescriptive of its audience’s behaviour is doomed to failure. Snigel and Friends, a show we saw at the Edinburgh Fringe last summer, was no crawling allowed, which meant my daughter spent the whole show squirming in my arms as she tried to get closer to the action. It was a shame, as it was otherwise a brilliant piece of work.

Early years theatre, then, is all about the audience. There’s no space for ego or artistic vision where babies and toddlers are concerned. They’re happy to stomp all over that too.