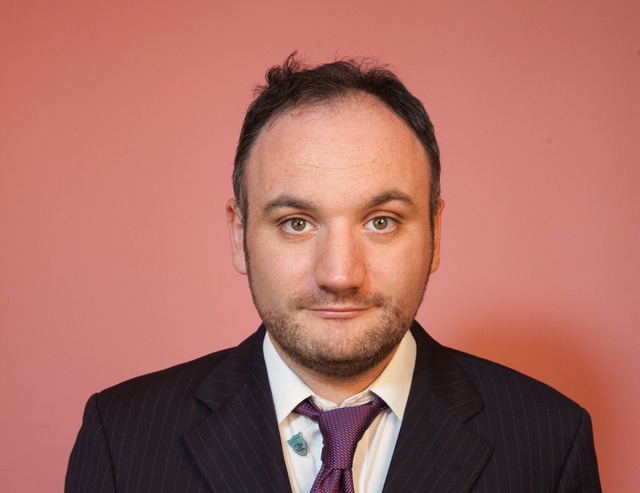 James Harris is a writer and comedian from Nottingham.

Here he takes a closer look at what makes a successful political comedy, even more relevant at the moment when our politics is already laughable...

This piece is commissioned by Emma Burnell in her role as Guest Editor for the Mobius blog. You can read Emma's introduction post here.

The first thing to remember about political comedy is that everyone hates it.

If you want to test this, show up on a mixed comedy bill and perform a political set. There will always be an instinctive audience resentment about you having shifted the night away from such unifying topics as yoga, coffee pods and Bake Off, particularly if you are an unknown and even if you are not.

A lofty conception of the political comedian’s role says that it is your job to absorb the hostility and educate the people; the legendary political comedian Barry Crimmins saw it as his duty to inform people who didn’t have the same time he did to keep up to date. I would suspect the majority of political comedians today operate under this premise; they take an issue, provide an up-tempo, ‘infotainment’ digest of the topic, laced with a few decent jokes to help the facts go down. When the conservative commentariat object to left-wing comedy this is generally what they mean, a sort of ‘clapter’ comedy, aiming for applause and agreement as much as laughter, which is there to let liberal people know what they should be thinking; it is predicated on a belief that ‘reality has a well-known liberal bias’, to quote Stephen Colbert.

My problem with this kind of comedy isn’t its politics, but that it often isn’t very funny. And I don’t think even the biggest fans of Michael Moore or Mark Thomas would claim that they were the funniest comedians around; rather, that their satire performs an essential social role in highlighting injustice from a left-wing perspective. The issue comes when you no longer exactly share this type of politics, or perhaps know more about the specifics of an issue than the comedians do; what also makes this type of comedy unsatisfying is that John Oliver, The Mash Report or Jon Stewart are noticeably weaker at satirizing the liberal left itself. In my view, this is because they are of the liberal-left, and as such have too much skin in the game – they believe that society would be better if their team won. And here is why I think this attitude is a fundamental problem for satirists: Satire is an exposure of corruption through comedy, and any faction in power for a long time will become corrupt and need replacing, regardless of its political identity; therefore, at bottom, your only team as a political comedian can be satire itself. To adhere to this it helps to include other views on your platform. For all his faults and crustiness, Bill Maher’s ‘Real Time’ is an interesting show for featuring guests of different political ideologies and backgrounds in conversation. To place your persona in exactly the right place to ensure an open and pluralist discussion is a skill for a comedian, and the closest we perhaps have to it in the UK, with his range of guests from across the parties, is Matt Forde’s podcast ‘The Political Party’.

Ironically, a welcoming atmosphere for different political views is best created by a political comedian being willing to mock all sides. That’s certainly been necessary in the last few years when the UK left has been, putting it politely, an absolute mess. The kind of left-wing satire predicated on reality’s ‘liberal bias’ seems particularly phony in a context when the British left has been mired in serious scandals in areas it should have been unimpeachable, such as the racism crisis in the Labour Party.

The night of the December 2019 General Election, I performed on a bill of political comedians and remember an act telling the audience – ‘People don’t like Corbyn because… he’s not the biggest fan of the Israeli government.’ That’s not a good bit of political comedy as it’s not true, it isn’t thinking hard enough, it’s not forcing the audience to look more closely at things, and it’s an exceptionally unreflective position to have arrived at after nearly three years of relentless controversy over the Labour Party’s treatment of Jews.

When asked why they only make jokes about the Tories, many political comedians are happy to say ‘Well, they have the power.’ This ignores that (a) there is more than one type of power and (b) the stupidity and chaos of the left is a key reason the Tories win so many elections. In addition, a comedy audience will usually have made up their mind about the Tories already. The idea of a comedian continually challenging their audience is a fantasy – if true, you wouldn’t have an audience – but a political one can at least have a joke for the Tories, a joke for Labour and a joke about the Liberal Democrats in every routine. (Trade secret: the words ‘Liberal Democrats’ at the end of any sentence always get a laugh).

Heritage satire formats, such as ‘Have I Got News for You’, also seem to operate vaguely along the principle of ‘have a pop at everyone’. Should we then celebrate them as good political comedy? What these shows do allow is for our ruling class to publicly show their willingness to be mocked, something comedians in other countries are in jail for. This is a worthwhile social function but a different one than providing brilliant comedy, and the innocence of that social function should also be questioned more since 'HIGNFY' consolidated the career of an actual Prime Minister.

It would be remiss of me to be passing these judgements without doing political comedy myself. I invite you to come and see my own show, ‘The Palace of Earthly Delights’, an unrestrained satire on the decadence of British political elites. Of course, compared to the comedians I have been discussing, I am not successful – but, given the role of the political comedian I have been outlining, would you really want one who was? Under the terms I have set out, a political comedian doing their job well would by definition succeed only in annoying everybody.

James Harris is performing his show ‘The Palace of Earthly Delights’ at the Canal Café Theatre, London, on February 19th (tickets). He tweets @JamesHarrisNow