From Our Guest Editor: Success and Mental Health in Creative Individuals 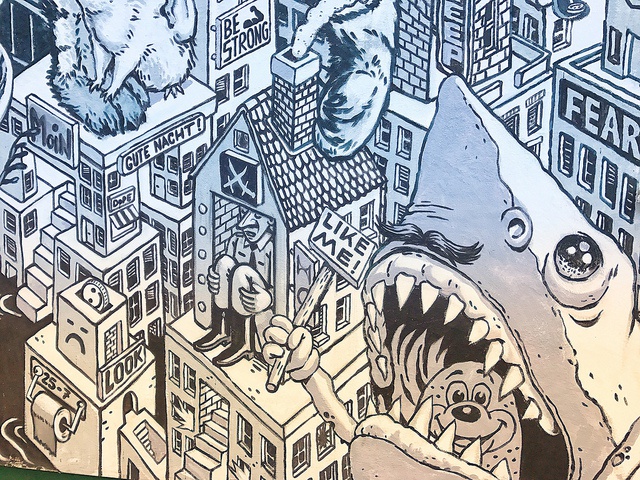 In the second article commissioned by Sam Sims as Guest Editor of the Mobius blog, following his personal essay on how success is defined, we hear from Josephine Balfour Oatts, writer and Reviews Co-ordinator for A Younger Theatre. She interviews medical professional, Dr Barbara Rooney on a typically miserable English day about success and how much damage this incredibly ambiguous idea is doing to our mental health.

The walk to the main building of The Priory hospital in Roehampton is a cold one, the morning air wrought with sounds of drilling. The building is at once imposing and soothing, its sheer size and sterile exterior dampened by shadows. Looking up, I observe the glow from a window overlooking the courtyard – it belongs to the office of Consultant Psychiatrist Dr Barbara Rooney, who specialises in the treatment of eating disorders. Inside, the place is a warren. Secure doors tunnel into wards, from which staff scuttle, clutching cups of coffee. I sign myself in, hastily pocketing my visitor pass as I head upstairs. Building work penetrates the walls and I take a seat opposite Dr Rooney, my chair vibrating slightly. She has agreed to talk with me on how the notion of success can affect the mental health of creative individuals - an urgent subject - given the marked rise in those suffering with mental illness in recent times.

From a psychiatric perspective, and for those with a psychiatric illness, Dr Rooney explains to me how first and foremost, success would mean the result of a good recovery. “Over the years, I have seen many patients who are writers, musicians, actors and actresses that do get very depressed,” she tells me, hands racing across her desk as she arranges her belongings. They may turn to drugs, alcohol and eating disorders, often finding that they cannot create or perform well during that time. Oftentimes, when a depressed or anxious individual begins to recover, that is when they start to use their art as therapy. “The key is management,” she says, with a reassuring smile.

During the manic state associated with Bipolar Disorder, sufferers are also known to engage in intensely creative behaviours. “There is a link between creativity and Bipolar Disorder, definitely,” she says, nodding. Virginia Woolf, for instance, was thought to have suffered from the condition, as was the artist Vincent Van Gogh and Gone with the Wind’s Vivien Leigh. However, “not all bipolar people are creative, and not all creative people are bipolar,” Dr Rooney adds, stressing the necessity of psychiatric intervention so that those diagnosed can learn to use the spells between depression and mania to their advantage. Due to sustained periods of increased energy, many people with Bipolar Disorder achieve huge amounts within their chosen field of work. For some, hypomanic phases can act as powerful fuel for productivity, which is why many sufferers are known to be incredibly successful.

Our words begin to stretch around more general observations: how presently, the term ‘success’ seems to be something shapeless, and like smoke, it is constantly changing, making it impossible to grasp. Dr Rooney confirms this as a huge potential stressor for those who wish to pursue a career in the arts sector (or otherwise), with monumental expectations relating to earning-power working to reduce confidence and in turn, increasing feelings of anxiety and depression. It is instances of vulnerability such as this that allow for habits like social comparison – measuring oneself against another – to endure. Does she often treat those that struggle with this? “Yes, I do”, she says gravely. “It’s never helpful to compare yourself with other people.” The rise of the digital age has made this practice all too easy though, with those who subscribe to platforms such as Facebook or Instagram becoming overly stimulated by an impossible range of images and ideas.

While there are those who seek to promote a healthy use of social media (such as the influencer Lilly Singh), the online world can feed into feelings of low self-worth. The advertisement of unattainable lifestyles and body types can be particularly harmful. This is dangerous, as the scrolling habit attached to such networks makes these feelings of failure addictive. Dr Rooney explains how some of her patients have chosen to remove themselves from social media – a decision that they have found to be helpful. It is the process of recognising and meeting objectives like this that form the basis of Dr Rooney’s treatment plans. For her, personal goal-setting is vital in working towards a greater management of one’s condition.

Pondering over her words, I quickly summarise in my head. Regardless of the state of your mental health, goal-setting can translate easily into an effective mode of self-care. It is crucial that one creates their own metrics for success according to their values and needs so that they may combat the perpetual sense of unfulfillment that comes with trying to meet the standards of others. This exercise could be focused on areas of life that are easy to measure, like one’s bank balance or career trajectory. Or, they could be organised around happiness levels, physical health, familiar and romantic relationships, as well as emotional wellness. “The key is being able to enjoy your successes,” Dr Rooney says, enthusiastically. This will be more difficult for those with a perfectionistic or high-achieving personality, but it is essential. Celebrating your achievements will aid in taking control of your inner critic - that pesky narrator who likes to tell you that you are never quite good enough, no matter what you do.

Dr Rooney looks past me, out into the flurry of winter. I remember the sad, sodden heads of those flowers hoisted above the entrance to the reception and am not eager to re-join them. I quickly tell her about my own anxieties around failure, and of my resolution for this year: to be more fearless. “We need to learn to fail, because it happens to all of us!” she exclaims, a laugh escaping her lips. Just then, our conversation begins to tumble over a common sensical threshold, and together we recognise failure as an opportunity for growth - a force to move with instead of against. Stepping outside of one’s comfort zone is a significant challenge, but it can be an event filled with adventure. “You’ve got to take a risk,” she says, encouragingly, “through failure comes success, really”.

Josephine is a freelance arts journalist, focussing mainly on theatre criticism and feature-based work. Since graduating from the University of Bristol with a BA(Hons) in Drama in 2016, she has contributed regularly as an author for A Younger Theatre and previously, Exeunt Magazine. Currently, she is acting as the Reviews Coordinator for AYT, and balances this with bookselling. At present, she looks after the Theatre and Art sections at the Waterstones in Covent Garden, and is passionate about storytelling in all its forms.