Can watching a play change your life? This is what I find myself wondering, four months after I sat in Northern Stage theatre, tears coursing down my cheeks as I watched the finale of the Sting musical The Last Ship. I had expected to sort of like it – I’m no big Sting fan (though girlishly thrilled when I spotted him in the bar before the performance), and I was mostly there for the novelty of seeing a show set and performed in the hometown that I, like the protagonist, had left decades earlier seeking a bigger life.

But something about that experience broke me wide open. Something about not just seeing people who sounded like me up on stage, but in the seats around me. Something about knowing I would be going back that night to a friend’s house, which was in the same Wallsend streets that were being projected onto the backdrop in front of me. Knowing, also, that I wasn’t alone – much of the audience was in the same state I was. The ecstatic Twitter feedback I feverishly followed afterwards echoed my own sentiments; the sheer delight in seeing an uplifting working class story on stage, without its characters being reduced to misery clichés or plot points to propel forward middle class dilemmas. More than that, I sat in that theatre and thought: I belong here. And realised I hadn’t felt that way in a long, long time.

I have been reviewing theatre in London and, latterly, Brighton, for the last decade or so, and a regular theatre goer for much longer than that. I have been published in The Stage; I was one of the first writers for Exeunt. And yet, I always felt like an outsider. Northern and working class in a medium that specialises in Southern, middle class stories (and a woman in an industry that still prioritises men’s lives and opinions), I felt unpolished and unconfident next to my peers – people who had grown up in families that could afford regular trips to the theatre, or gone to schools where ‘drama’ meant more than watching the fights in the hallway.

My disillusionment chimed with a wider moment. Projects like Common were tackling access for working class artists, initiatives like Critics of Colour aiming to redress the shameful racial unbalance in arts criticism (if I felt like an outsider, how much harder must it be to be Black or Asian, and step into a venue full of white faces?). But it also felt like something I would never properly address in Brighton.

Now, I have loved theatre in Brighton. The Theatre Royal has a steady diet of touring productions and has recently expanded into programming smaller shows in its unused spaces; the Dome and The Attenborough Centre featured more contemporary and less traditional fare. Venues like The Old Market catered to smaller, indie shows, while clever programming has turned The Marlborough from merely a room-above-a-pub to one of the most innovative LGBT+ venues in the country.

But if you asked me to define the Brighton theatre scene, I couldn’t. Five years of frequent theatre going, five years of Brighton Festival, and it still feels like everything I have seen had one eye on the door. Shows are tested for Edinburgh or London, or the city is just another stop on a tour by someone off the telly, acting in a play that people recognise by name. While I don’t believe it’s healthy or necessary to stage just Local Shows for Local People, surely some theatre needs to be rooted in its community?

So, I find myself back home. There is a mix of motives for my return. The lower cost of living. Proximity to my family, which feels more necessary after a series of losses reminded me how fragile those bonds can be, how important it is to tend them. But also a longing, as a critic and creator, to belong to an art scene that feels grounded by where it is.

I am lucky, in that Newcastle is well-served for theatres. It’s in the architectural glory of Grey Street’s Theatre Royal that I first saw Shakespeare – Mark Rylance with his pyjamas down as Hamlet, Derek Jacobi’s Richard III, where I was in a seat so cheap that for most of the play I couldn’t see his head (don’t quote me on those – it was a long time ago, my memories are hazy). It still attracts the kind of big budget shows that I was familiar with in Brighton.

Northern Stage tends to offer more experimental fare. Some of this is home grown – The Last Ship’s triumphant revival after its stuttering New York run, a remake of War of the Worlds that is set in the North East. Some are touring productions and some, like upcoming The Lovely Bones, created in collaboration with other regional theatres. The Quayside’s Live Theatre has a vibrant writing programme encouraging local talent, but also attracts strong outside shows (it is hosting the UK premiere of Roddy Doyle’s Two Pints, which will also be staged in Sunderland).

But all of these, alongside smaller venues like Alphabetti, seem far more rooted in their community than I am used to seeing. Perhaps I am just noticing more – because this is, after all, my community – but it feels like a more nourishing environment than either London or Brighton, albeit one that comes with the financial constraints of an austerity-battered region. It’s not just Newcastle itself, but across the North East, where local stories are flourishing – South Shields Customs House (motto: ‘art and entertainment for all’), for example, recently staged the specially commissioned adaptation of TV classic When the Boat Comes In, which is set in a fictional version of that very town.

I’m still uncovering what it means to be a critic in this city. When everybody knows you, what happens when you give something a bad review? Are you more valued, or less, than imported London talent, popping up to see a show on the train? I write for national publications: how careful must I be to measure my reactions for an audience two theatres further into the tour, that might not get that joke about Fenwick’s windows? I don’t have answers, yet, to these questions. But I am still enjoying that feeling, so long absent in my life, of walking into a theatre and thinking: I belong. 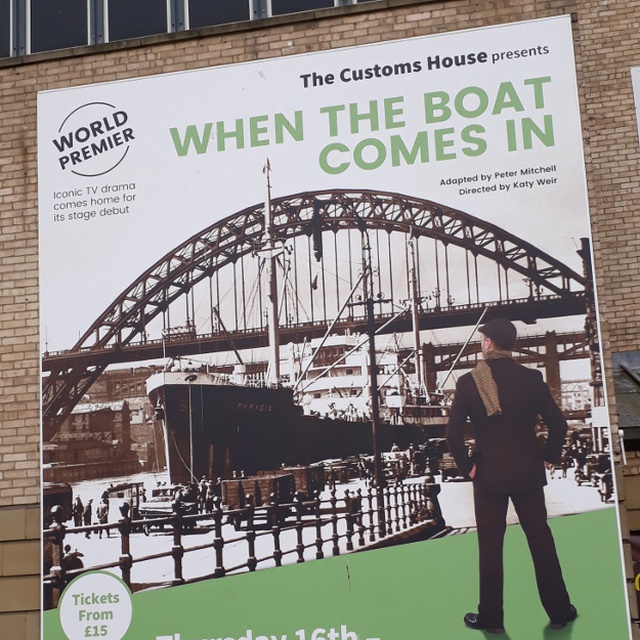 Tracey Sinclair is a freelance editor and writer, a published author and performed playwright. She writes for a number of print and online magazines and most recently has focused on the Dark Dates series of books, including A Vampire in Edinburgh. You can follow her on Twitter under the profoundly misleading name @thriftygal