"Not just a European or Balkan event, it's open to the world" - The Kosovo Theatre Showcase 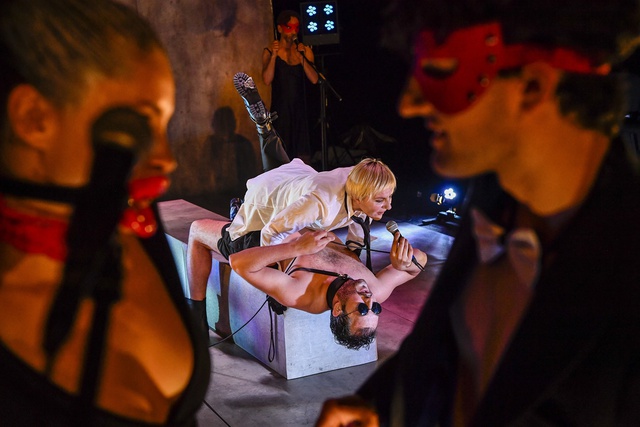 This week our blog is set in Kosovo, as PR Consultant Elin Morgan travels to take in the best of Kosovo's arts scene.

Elin Morgan is a PR Consultant for Mobius Industries and also consults independently with clients and projects in the arts, education and charity sectors.

Now in its 5th year, the Kosovo Theatre Showcase is an annual opportunity to get a snapshot of the flourishing theatre scene of Europe’s youngest country – and to get to know a country many have not kept up with since the devastating war in the late 1990s which dominated news headlines.

While there are echoes of the region’s recent history clearly visible around its capital city, and these events are reflected upon in the theatre programme, the Pristina of today is a vibrant, young city, compact and navigable, with a busy, friendly centre and plenty of places to put the world to rights over a coffee or beer. The showcase takes place primarily in the capital but also visits other cities. This year, there were eleven shows, plus work-in-progress sharing, discussions, and chances to meet and talk to other delegates – as a banner at the showcase put it, ‘long nights with Raki’.

The showcase is put together by Prishtina-based Qendra Multimedia, which is run by Jeton and Blerta Neziraj, a playwright and theatre director respectively. Qendra’s production The Handke Project, performed by a pan-European ensemble, was a key component of this year’s programme. It’s a production Mobius has been working on as it toured Europe this summer, and which Nick Awde wrote about for this blog.

This was the busiest showcase to date with over 60 delegates from across Europe (and further afield) attending alongside local audiences over five days in October. In a 48-hour flying visit I managed to take in six shows and a panel discussion, and still found time to talk to delegates from all over the world - theatre makers, actors, writers, producers and programmers, academics and critics. I asked some of them what their highlights of the showcase had been. For Mina Milošević, a dramaturg, playwright and critic from Serbia, on her first visit to Kosovo, a production stood out; “Our Son by Patrik Lazić made a big impression in its usage of storytelling for truth-telling.”

The Kosovan theatre scene is close-knit and the teams involved in several productions were interlinked and overlapping, with faces and names becoming familiar as we travelled between them. So too did the faces of our co-delegates and the local theatre crowd hanging out in the Oda Theatre's underground bar after shows. For Borisav Matić a critic and dramaturg based in Serbia, that was a highlight: “Sparkling, intelligent, critical and thought-provoking conversations with colleagues about the performances presented. Sometimes they happened in formal settings, at other times they happened over a coffee or a drink, but they all proved that crucial to organizing a successful showcase is not just excellent programming but also gathering a community of devoted theatre professionals.”

This was echoed by Natasha Tripney, International Editor for The Stage, who alongside German critic Tom Mustroph ran a course for emerging critics alongside the festival “For me, the highlight was the sense of community that the organisers at Qendra Multimedia created between attendees. The warmth, hospitality and thoughtfully programmed events and panels were really successful in introducing and connecting people to one another and it felt like lasting relationships were being built.”

Though the artists performing are mainly Kosovo-based and a number of delegates had come from neighbouring countries, there were a sizeable number of visitors from the UK – English being the lingua franca of the event. Some had come even further. Huang Pei Wei works in theatre in Taiwan and is Secretary General of International Association of Theatre Critics (Taiwan) For her “It's not just a European or Balkan event, it's open to the world, where people meet and leave with a message, and let the message and the connection lead to the next encounter”.

As I set off for my trip, I left behind grim news of political turmoil in the UK. Other than the odd wry joke, when conversations turned to politics they were more often issues that are affecting us all, wherever we live – the cost of living, energy and climate change among others. An illuminating discussion on ‘Theatre Beyond our own Backyard’ went beyond its allotted slot and continued in the bar. On the panel, Jakub Skrzywanek, Artistic Director of Poland’s Współczesny Theater spoke of theatre as a utopia where people could see possibilities beyond the current political realities.

I’ll leave the last word on the showcase to Bora, a linguist, educator and aspiring theatre critic based in Prishtina whose highlight was the “Countless opportunities to learn more about theatre as art and as a tool to bring humans closer. An excellent showcase of the talent and potential of our small country with a big soul.”

Elin Morgan is a PR Consultant for Mobius Industries and also consults independently with clients and projects in the arts, education and charity sectors.