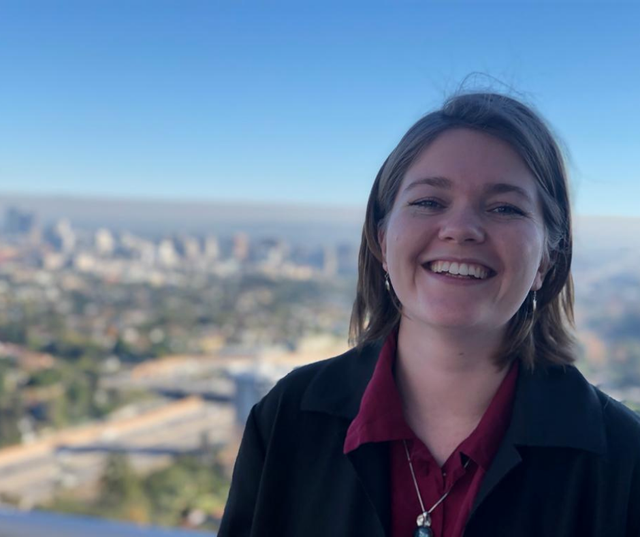 Rosie Tricks is a theatre director based in Bristol, most recently directing for Circle Theatre’s Inner Circle. She is currently working on a production for the virtual theatre festival Renderings, a collection of works inspired by the paintings of Edward Hopper. Here, Rosie questions theatre’s relationship to political change and considers whether theatre can prompt real-world action. Can it create an impact that outlives the stories it tells? Can we measure its success in doing so?

This piece is commissioned by Emma Burnell in her role as Guest Editor for the Mobius blog. You can read Emma's introduction post here, James Harris' guest post here and Steven Fielding's guest post here.

It’s been almost five years since I saw Katy Baird wee in a wine glass and drink it on stage, swirling quietly before taking the first sip. She smiled into her laptop, the live stream projected above her giving us both the client’s and the roommate's view. Workshy was a performance at the Edinburgh Fringe about the jobs that Baird had alongside being an artist and human in the world. It was a wonderful, tipsy experience that ended with warm chips being passed around the lecture pews, and I remember leaning over in the dark to a stranger in the audience and asking them to pass the ketchup.

Five years on, and I’m used to popping into multiple paid worlds for a bit at a time - poking a hoover into classrooms, or blinking in the lights of the Royal Mail warehouse at two in the morning as I toss an envelope into a red sack and wonder why I can’t stop humming Christmas songs. As I find myself in these places, I think of Katy and that show. Theatre can do that. Stories told by a real person in real life find a spot and bed in, and they can change how we see ourselves and each other.

Workshy became part of my worldview, and we’ve all seen shows that have had that effect. The relationship we have with them is an individual one, despite being experienced in a room full of people, and it tends to take place within us. It is a profound way of defining and exploring the experience of being human.

In thinking about theatre’s relationship to political change it’s worth considering whether theatre can also prompt real-world action. Can it create an impact that outlives the stories it tells? Can we measure its success in doing so? Turning an audience into people who will go out and do something can be tricky. It means finding a way to sustain impact so that it survives the lights fading up, rather than ebbing away as the audience disperse. There are many ways to throw yourself into this as a theatre-maker, but in the course of the past year, there have been two methods that have struck me in particular.

The first is just…being specific. Apphia Campbell’s Woke follows Ambrosia, a young woman starting college and becoming politically engaged during the 2014 Ferguson Black Lives Matter protests. In it, Campbell meticulously lays out the process of police giving tickets (and resultant fines) for a vast array of infractions, an exponentially punitive system in which Ambrosia gets caught. Detailing this process, that disempowers and corrodes the resources of black people through criminalisation and exploitation, is a powerful form of activism. It exposes it to those who have not experienced it, and amplifies the reality of those who have.

It also helps define and identify ‘what next?’, empowering audience members to engage with the world outside the theatre walls. Our education system does not always effectively equip us to be politically active members of society, and clearly demonstrating the connection from the human story to the institutions and frameworks that shape it can give direction to the passion the performance has inspired.

If giving the audience clear tools to go forward is one way of bridging the gap to the outside world, another is expanding the connection from audience to performance to also include audience to audience. While the brilliance of live theatre is that the people at that show share an experience that is unique, all too often we spend it invisible to one another, leaving separately once the curtain falls. How can we make the most of this opportunity, and form a collective experience as well as an individual one?

One way is through opening up the discussion so that the story becomes something we can get our hands around, that forms a language between us. For example, acta community theatre’s Hard Evidence was created by survivors of domestic violence who were part of the COMforT research study, and presented the stories of two women at different points on the journey through surviving abuse. After the show a Q&A was held, a forum for an audience that included fellow research participants and their families, researchers, and members of the community. The story created a space to come together and talk, where the audience shared their interpretations and ideas for future action with one another.

We can tell powerful stories, and then hand them over. Opening channels of communication between audience members can support the transition from immersion in the story to the real world - after all, if I’ve been given permission to start talking to the people around me, I’m much more likely to do it.

Techniques for encouraging the observer to be an active member of the room can be drawn from Boal to Brecht and beyond as we ask the question ‘what do I want to happen after this performance, and how can I encourage it to take place?’ While a great deal of theatre continues to be performed to liberal, middle-class, seasoned theatre-goers in venues where the audience sits obediently in the dark, it is exciting to see this transformed. Audiences (fingers crossed) outnumber performers, and are a valuable resource if we are looking to create theatre that is liberational in its impact.